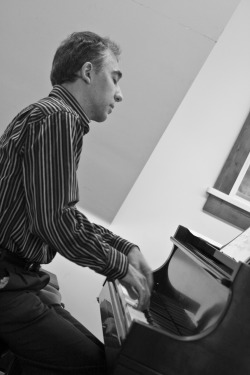 Dimiter Terziev was born in Sofia, Bulgaria, where he graduated from the National Academy of Music in 1992. After three years of teaching in Bulgaria, Dimiter moved to Canada where he earned a Diploma of Advanced Music Performance Studies from Concordia University in Montreal and a Master's Degree in piano performance from the University of Alberta in Edmonton. Throughout his studies, he had the opportunity of working with a number of distinguished piano teachers such as Antoaneta Arsova, Milena Mollova, Nikolai Evrov, Dr. Anna Szpilberg, and Dr. Stephane Lemelin.

Dimiter is now living in Kamloops, British Columbia with his wife Ilka and daughter Gergana; He teaches both online and at his private studio in Upper Sahali. He is also an accompanist of the Sage Singers Choir in Ashcroft.

Terziev has performed numerous  piano and chamber recitals in Canada, USA, Bulgaria, Germany, and the Netherlands and was awarded third prize at the Chopin National Competition in Bulgaria in 1989. He has also performed with several Bulgarian orchestras, the Kamloops Symphony and Kamloops Brandenburg Orchestra.
In 2017 he won a touring grant from the British Columbia Arts Council to perform a series of lecture-recitals in Eastern Canada.

Dimiter's debut CD Colours of Bulgaria: Piano Pieces by Pantcho Vladigerov was awarded Four Stars both by the CBC's Sound Advice and La scena musicale magazine. His other successful recordings are Nocturnal World  (an anthology of nocturnes by various composers), The Beginning and End of Classicism  (a history of Classicism in music from J.C. Bach to the late Beethoven), and Anger and Hope: Beethoven - Late Works

Dimiter is a member of the British Columbia Registered Teachers' Association and  Chamber Musicians of Kamloops .
Aside from music, he enjoys hiking, reading, and watching movies.

"He is a musician of deeply reasoned convictions, who already has a well-defined understanding of his own artistic voice. He is a musician who thinks at the piano and who has the gift of communicating his artistic vision in an engaging manner."
(Dr. Stephane Lemelin, Canada)
Google Analytics